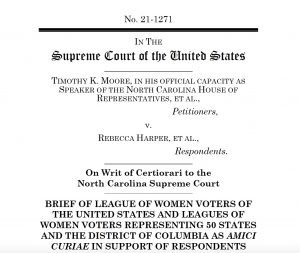 The League of Women Voters of the United States and League chapters from all 50 states and the District of Columbia filed an amicus brief in the Moore v. Harper case before the U.S. Supreme Court. The case concerns the so-called “independent state legislature theory” (ISLT), which, if adopted, would have far-reaching implications for the future of American democracy. The League is represented by the Fair Elections Center and O’Melveny & Myers LLP.

“Giving states unchecked power to set rules for federal elections is an assault on the American voter,” said Virginia Kase Solomón, CEO of the League of Women Voters of the U.S. “Historically, state legislatures have enacted the most harmful and suppressive anti-voter laws, and pro-voter groups like the League have relied on the ability to fight them in state courts. The Independent State Legislature Theory is a dangerous, fringe ideology that leaves voters effectively defenseless from harmful election laws.”

MaryLee Moulton, president of the LWV of Nebraska, pointed out that “Nebraska is unique in that we have only one house — the Unicameral. The people of Nebraska are considered the second house, and the initiative process is a key component of enacting change in our state. The Independent State Legislature Theory could endanger the input of the public in our state. It could allow politicians to manipulate the outcome of elections and would remove the checks and balances outlined in the Nebraska Constitution.”

The League of Women Voters has serious concerns about this case because a ruling adopting ISLT would give state legislatures nearly unrestricted authority to set the rules for federal elections, prioritizing the ambitions of politicians over the American voter. Furthermore, if the Supreme Court condones this theory, it will undermine the role of state courts to protect voters when politicians create unconstitutional barriers to voting, draw unlawful voting maps and invalidate direct democracy efforts like ballot initiatives.

“In creating the U.S. Constitution, the framers were intentional about establishing a checks and balances system to disrupt any one branch of government from becoming too powerful,” said Celina Stewart, chief counsel and senior director of advocacy and litigation at the League of Women Voters of the U.S. “Because state courts have been vested in the salient role of deciding disputes that govern our daily lives, any unraveling of this longstanding balancing would be a dangerous and historic blow to democracy as we know it. We implore the court to rule in favor of voters and reject the Independent State Legislature Theory.”

As this case has massive implications for every state, the League of Women Voters amicus brief expresses the concerns of Leagues representing all 50 states and the District of Columbia. The League’s brief focuses on the practical, negative impacts that ISLT will have across the country. Specifically, the brief explores how implementing such a theory would create different election rules for state, local and federal elections that would cause confusion for administrators and voters alike and would have a deleterious effect in maintaining free and fair elections.

“The theory advanced in Moore calls for a legal revolution that would chop up and alternate rules by type of election, ushering in chaos and confusion for poll workers and voters,” said Jon Sherman, litigation director and senior counsel for the Fair Elections Center. “In this dangerous moment for our democracy, the Supreme Court must be a steady hand.”

“Our team is privileged to have had the opportunity to collaborate with the League of Women Voters and the Fair Elections Center in showing how ISLT would shatter election norms and processes that are central to the functioning of our democracy,” said Meaghan VerGow, partner at O’Melveny & Myers LLP.

League of Women Voters of Nebraska 5 days ago

37% of #Nebraska Senators in the new session will be women! #NELeg will have 18 women.