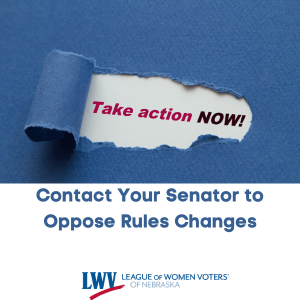 The Nebraska Unicameral’s Rules Committee is considering proposed rules changes that will replace the secret ballot with a roll call vote and close Executive Sessions to the news media.

The Rules Committee is responsible for procedural matters relating to the legislative process. The rules adopted govern how the  Unicameral functions for a two-year period (the 107th Legislature will have two sessions – 2021 and 2022). It is important that the rules maintain a nonpartisan climate in the legislature.

The League is opposed to proposal #2, submitted by Senator Tom Brewer, to replace the secret ballot with roll call votes. The League supports the use of the secret ballot for leadership elections to maintain the nonpartisan nature of the Legislature.

The League is also opposed to proposal #6, submitted by Senator Dan  Hughes, to close Executive Sessions to the news media. The ability of news reporters to be present and report on Executive Sessions is key to maintaining the trust of citizens in the legislative process.

The League encourages Nebraskans to contact their senators ASAP to oppose rules changes #2 and #6 and support rules change #4.

League of Women Voters of Nebraska 10 hours ago

Thank you Speaker @mikehilgers for changes to allow for public access during covid. #neleg #nebraska #omaha

League of Women Voters of Nebraska 11 hours ago